Alaska continues to play a crucial role in protecting U.S. national security. As the Arctic continues to melt, the region is becoming a breeding ground for strategic competition and adversarial action. Leaders on all levels need to work together to both mitigate and adapt against the risks climate change poses to Alaska.

Join the Alaskan Municipal League and the American Security Project for a discussion on the impacts climate change is having in Alaska, the ramifications it has on U.S. national security, and potential regional solutions. Executive Director of the Alaskan Municipal League Nils Andreassen will be joined by ASP President Brigadier General Stephen Cheney, USMC (Ret) for a one on one conversation. 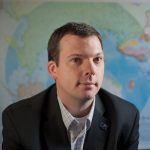 Nils Andreassen is the Executive Director of the Alaskan Municipal League, a voluntary, nonprofit, nonpartisan, statewide organization representing the unified voice of Alaska’s local governments to successfully influence state and federal decision making. Nils has a degree in Peace and Development from the University of Bradford in England with an extensive background in rural and international development, Alaska, and Arctic policy issues. Nils is currently pursuing a Master’s degree in Governance and Entrepreneurship in Northern and Indigenous Areas through the University of Saskatchewan and the University of Tromso. Nils lives in Juneau with his family. BGen Stephen Cheney, USMC (Ret) is the President of the American Security Project. He is a graduate of the U.S. Naval Academy and has over 30 years experience as a Marine.  His career included a wide variety of command and staff positions with the operating forces and the supporting establishment.  Gen. Cheney’s primary specialty was artillery, but he focused extensively on entry-level training, commanding at every echelon at both Marine Corps Recruit Depots, to include being the Commanding General at Parris Island.  He served several years in Japan and has traveled extensively throughout the Middle East and Asia.