The panel addressed U.S. military facilities in the Persian Gulf and the role they have in maintaining American influence, effects on security and stability, and contributions host governments make to assist the U.S. Each speaker stressed the important positive role the U.S. military presence has had on stability in the Middle East. There was also discussion of considerations being made about current bases in the Middle East and in negotiating SOFAs and DCAs.

Brigadier General Cheney began by speaking on the positive impact U.S. troops have on the region in improving stability and lowering the risks of armed conflicts. This has not always been the case, in the example of Osama bin Laden’s attack in Saudi Arabia because of the U.S. troops stationed there which led to moving troops out of Saudi Arabia and into Qatar. Status of Forces Agreements (SOFA) and Defence Cooperation Agreements (DCA) are essential for ensuring security. U.S. troops were pulled out of Iraq because a SOFA could not be negotiated. He also put emphasis on the public diplomacy aspect of military basing; there are opportunities for Americans to build relations with locals and immerse themselves in the culture of the host country. David Des Roches, an Associate Professor at the Near East South Asia Center for Security Studies, addressed three main ideas: the kind consideration that goes into bases in the Middle East, the considerations that make bases viable, and misconceptions of both. Projection of power is an important aspect of military facilities, especially in the Gulf. An installation like the Naval base in Bahrain with the Bahrain-American school gives significant soft power projections, making it one of the most important facilities in the Gulf. Bases have different capabilities based on the needs of the U.S. and what the best way to project the necessary power is. National and strategic interests are also to be considered. If the U.S. is attempting to negotiate a SOFA or DCA, it would be more difficult if the U.S.’s interests and the host country’s do not align.

Bases need to be culturally appropriate for American forces. Des Roches used the example of Marth McSally, a pilot stationed in Saudi Arabia. She was critical of the inequalities women faced in Saudi Arabia, pointing out she can complete her missions operating an aircraft but cannot drive when back on base. This ultimately led to a discussion in Congress because there was a disconnect in the culture and values of America and Saudi Arabia. Staff Major General Al-Attiyah, the Inspector General for the Qatar Armed Forces spoke highly of the long-standing strategic relationship between Qatar and the United States. The presence of the U.S. in Qatar is viewed positively and has allowed both nations to cooperate on regional and global security issues. Despite potential regional unpopularity and becoming a target for extremism, strong relations were maintained. There are future plans to expand Al Udeid Air Base and build a new naval base capable of handling large U.S. Navy ships. Beyond military agreements, the relationship with Qatar and the U.S. is economic as well. The U.S. is Qatar’s largest foreign investor in its gas and oil sectors and trade relations continue to grow. This multifaceted strategic relationship is a priority of both Qatar and the U.S. and will hopefully help improve political and economic security and social stability.

The discussion closed with several audience questions, one on the consolidation of U.S. naval forces in the Gulf and suggestion of if Qatar was attempting to draw U.S. forces away from Bahrain with the new base being planned. Major General Al-Attiyah answered that Qatar is not attempting to pull American forces away from Bahrain but make the U.S. military as comfortable as possible. BGen. Cheney then agreed that it is not aimed at consolidating the U.S. Navy, but will give the Navy the ability to spread its forces out giving more security.

Another question was asked on the potential impact of rising sea levels on installations in the Middle East. Major General Al-Attiyah said the Qatar Armed Forces is not currently worried about rising sea levels threatening bases and other operations. Des Roches argued a more significant threat in the region would be temperature change and the adequacy of water. Climate change as a broad concept will have negative impacts on installations around the world, but specific threats will depend on the regions. 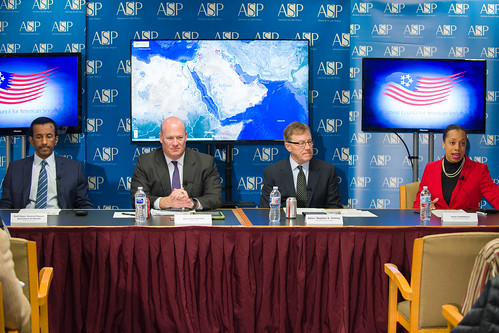